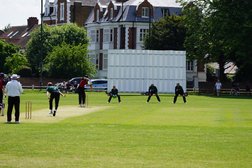 By Dan Hough
6 days ago
Share via
FacebookTwitter
https://www.twickenhamcc.net/n

Week 14 sees the final round of timed cricket matches in the Middlesex County Cricket League (MCCL). The ones end that particular nine week stretch by welcoming league leaders North Middlesex to the Green. The top of the table twos, meanwhile, have a mouth-watering trip to second placed Finchley to look forward to whilst the threes host Acton.

The fours are off to North London 4s and the 5ths travel to Hatch End Playing Fields to play fellow promotion-chasers, West Harrow 3s. Finally, the indomitable sixths are once again in action; they travel to play Wimbledon Corinthians 3s.

Ones welcome North Middlesex
The ones are back on Twickenham Green and they look forward to pitting their wits against title-chasing North Middlesex. The Midd are five points ahead of Teddington (see here) and they’ll no doubt be looking to build on that in TW2.

Over the years the Midd have put together a strong unit and they present a real challenge for Carlos Nunes’s men. That having been said, the Ts have a history of upsetting their respective apple cart and the hosts will once again be looking to spring a surprise. After all, it was this game last year when Twickenham needed six to win off the last ball … and Rashid Mullazahdah ensured they got it (see here for the clip).

It’s likely that three of North Middlesex’s band of Middlesex players may well be out on Royal London Cup duty (Middlesex play Durham on Sunday). Twickenham’s Middlesex player, Blake Cullen, continues to return from injury so he won’t be off to the North East. He plays as a batter for the Ts.

Over and above that, Radha Marripati has been in decent nick of late and he returns to the Twickenham side. He’ll certainly be looking to make an impact. He replaces the unavailable Neville Talbot. That aside, it’s as you were from last week.

Twos travel to Finchley
The 2nd XI have returned to form over the last couple of weeks and they will travel to Finchley in a positive frame of mind. Finchley have also been doing well, as a three wicket triumph against Osterley last week illustrated (see here for the table). A decent contest looks on the cards.

Skipper Nakul Vishvanath is forced to do a bit of squad rotation this week, although a case can be made that the side is stronger rather than weaker as a result. Parminder Singh is a case in point; the left arm tweaker hasn’t had his most prolific campaign in the ones and so drops down to the twos. Ajmal Allahdad also returns at the top of the order, whilst ebullient club chairman, Eugene Berger, is going to play through the pain barrier.

Thirds welcome Acton
The thirds need some points and they need them quickly. They currently sit bottom of the Division One table (see here).

That having been said, all is far from lost. A 12 point win could quite plausibly see them jump to 7th. The key will be whether skipper Hinay Dassani can get all the moving parts in his side pushing in the same direction.

With Dev Tomlinson and Mehran Iqbal in the side he clearly has two impact players who can turn any game at this level. Debutant Andrew Riddle will be hoping to make his mark, whilst youngsters Imran Niazi and Monish Malhotra also have bags of potential.

North London currently sit seventh, ten points and three places behind the 4s (see here for the table). The hosts have had a bit of a topsy-turvy year with some decent wins and some peculiar losses. A bombastic 185 run defeat of third placed Stanmore two weeks ago is a good case of the former and an eight wicket defeat against Hornsey last week a case of the later. Let’s see which North London side turns up on Saturday.

The fourth XI has been a bit of a moving feast this week. Nihal Tomar is away at a family doo so Chetan Ubale will be once again taking the captaincy reins. As ever, the fours are blessed with a mix of youth and experience. As things stand, their side is as follows.

West Harrow have had a solid campaign. They sit second in the ladder, 14 points ahead of third placed Twickenham (see here for the table). West Harrow come off the back of a good win against Actonians and they’ll know that a win against the Ts will go a long way to securing them one of the promotion places.

The globe-trotting Liam Tebb returns to the 5th XI side and he’ll no doubt take up the mittens and loiter behind the stumps. The side has a nice feel of continuity to it, and skipper Harmeet Singh, following on from a scintillating zero opening the batting on the Wednesday of cricket week (see here for more on that game) will be hoping that the side has enough in the locker to spring a surprise.

Sixths travel to Wimbledon Corinthians 3rds
The sixths are once again in action. Indeed, they come off the back of a decent win against Sheen Park 3rds last week.

Paul McLoughlin is again in charge although he has the experienced duo of Deep Dasgupta and Chris Wylde to call on for advice. Two of the Prescott-Brann clan make the starting XI, whilst youngsters Alfie Gales, Aarush Jain and Ben Hawkins are in. Harry Tebb and Varun Ghatge are also back in the starting line up.

With the sun (again) likely to be shining, a day of excellent cricket looks on the cards. Bring it on.